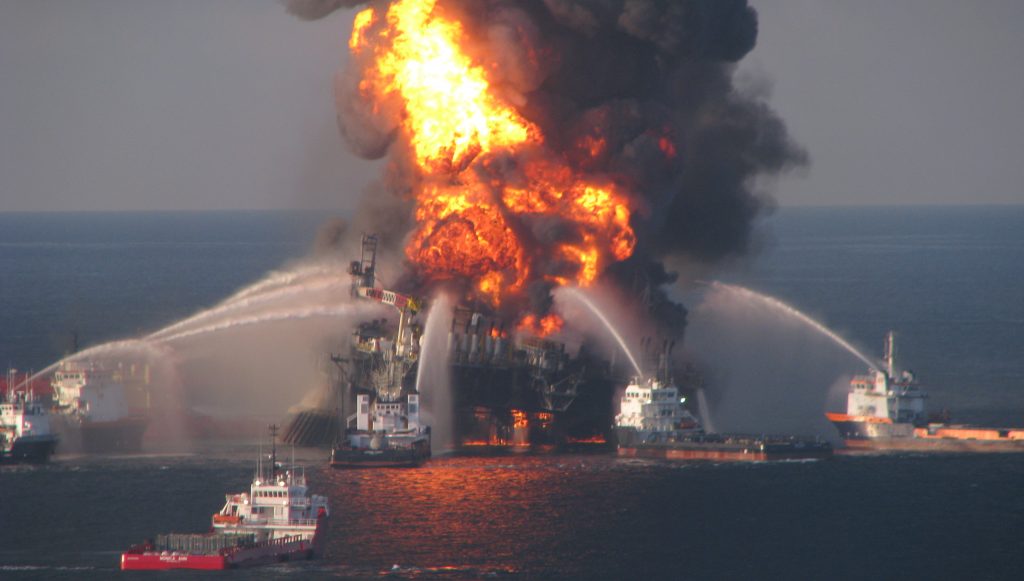 A study from The University of Texas at Austin is the first published in a scientific journal to take an in-depth look at the challenging geologic conditions faced by the crew of the Deepwater Horizon drilling rig and the role those conditions played in the 2010 disaster.

The well blowout killed 11 people and spewed oil for three months, spilling about 4 million barrels of oil into the Gulf of Mexico before crews successfully capped the well. Researchers and investigators since then have focused mostly on the engineering decisions and mistakes that led to the blowout and the ecological impacts of the oil spill that became one of the country’s worst environmental catastrophes. But researchers from the UT Jackson School of Geosciences, aided by thousands of pages of documents made public during lawsuits and legal proceedings, have pieced together how the geologic conditions more than 2 miles under the Gulf floor made drilling difficult and drove engineering decisions that contributed to the well’s failure and the ensuing blowout.

The study, published May 7 in Scientific Reports, documents, among other things, a significant and steep drop in pore pressure inside the rock near the bottom of the well that influenced the decisions that contributed to the blowout.

“The paper tells the geological story behind the catastrophe,” said Will Pinkston, who authored the paper while earning a master’s degree at the Jackson School. “It is high impact science, and I’m excited to reach a wider audience of people who don’t think about these issues every day.”

The engineering and geosciences challenges posed by drilling wells miles under the surface of the earth are enormously complex. One of the most critical is to maintain the pressure within the well so that it is higher than the pressure within the fluid inside the rock but lower than the stress at which the rock fails.  If pressure inside the well is too high, it will fracture the well wall and drive drilling fluids into the rock. If the well pressure is lower than the rock’s fluid pressure, fluids from inside the surrounding rock will flow into the well and potentially cause a blowout.

To successfully drill, crews use drilling “mud,” a slurry that can be mixed to varying weights and consistency, which is circulated throughout the well to help stabilize the hole and control pressure. Crews then line the exposed well with cement and steel casing to seal off exposed rock.

In the case of the Transocean Deepwater Horizon drilling rig, which was operated by the BP energy company at the time of the accident, the pore pressure was very high throughout the well, but then dropped abruptly by about 1,200 pounds per square inch near the bottom. Most of the pore pressure drop occurred in the 100 feet above the reservoir target of 18,000 feet below sea level.

BP planned to temporarily abandon the oil well, the initial well in the Macondo prospect, until it could be produced at a later date, by plugging the base with steel and cement. However, the sharp drop in pore pressure, and an associated decline in stress, drastically narrowed the range of options to seal off the well. This led to the decision to use a controversial low-density foam cement that failed to set properly. This was a key cause of the Macondo well blowout.

“The bottom line is that the geological conditions led to a decision to use a specialized cement that failed,” said Peter Flemings, a Jackson School professor and study author. “This decision was a root cause of the ultimate blowout.”

Flemings was a member of the Deepwater Horizon well integrity team assembled by then-U.S. Energy Secretary Steven Chu to help respond to the disaster.

Beyond describing the pressure and stress conditions in the well, the paper maps geologic conditions across the entire subterranean basin to show that the pressure drop is not a unique event in that area.

“Macondo isn’t a one-dimensional problem,” Pinkston said. “We found evidence of large-scale fluid connectivity across the basin, and this would have been hard to predict.”

Although the paper does not pinpoint any single reason for the catastrophe, Flemings said it offers important information for the larger drilling community.

“One of the significant things about this paper is to get all the data on the table so that the general community can understand the decisions that were made,” Flemings said. “I broadly believe that if engineers and geoscientists are more aware of how pressure and stress and engineering decisions couple, better decisions will be made.”

The study was funded by Flemings and the UT GeoFluids consortium. Data from the consortium and the University of Texas Institute for Geophysics Gulf Basin Depositional Synthesis project were used in this study. BP is one of the companies that supports the consortium.